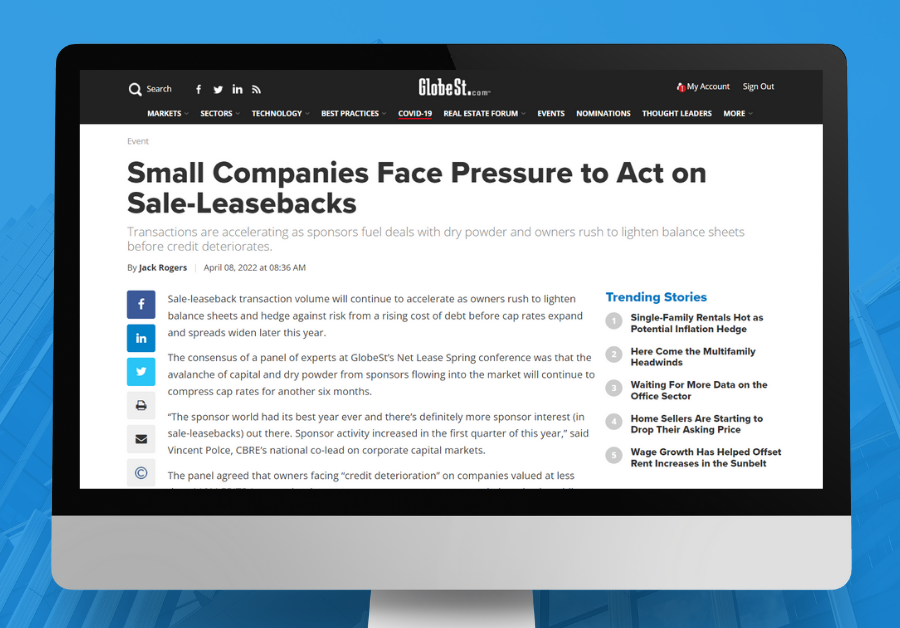 Sale-leaseback transaction volume will continue to accelerate as owners rush to lighten balance sheets and hedge against risk from a rising cost of debt before cap rates expand and spreads widen later this year.

The consensus of a panel of experts at GlobeSt’s Net Lease Spring conference was that the avalanche of capital and dry powder from sponsors flowing into the market will continue to compress cap rates for another six months.

“The sponsor world had its best year ever and there’s definitely more sponsor interest (in sale-leasebacks) out there. Sponsor activity increased in the first quarter of this year,” said Vincent Polce, CBRE’s national co-lead on corporate capital markets.

The panel agreed that owners facing “credit deterioration” on companies valued at less than $10M EBITDA are under the greatest pressure to act now on sale-leasebacks, while those companies valued at more than $100M may decide to stand pat and see how much spreads widen.

“There won’t be credit deterioration for $100 million to $1 billion companies, so you won’t see cap rate expansion for those. When you get under $10M company EBITDA, that’s where we’re going to see credit deterioration,” said Chris Capolongo, managing director Angelo Gordon.

Operators also are under the gun to decide whether they become buyers or sellers, and a lot of companies are wavering as they try to anticipate how quickly market fundamentals will change.

“I’m not seeing a lot of re-trading, but I anticipate it any second,” said Camille Renshaw, CEO of B+E. “There are a lot of discussions about whether it makes more sense to keep it on the balance sheet for the short term while the debt cost is lower, or to extend it for a 20-year period.”

“We’re seeing some corporate teams make a decision and then re-consider factors like supply chain and change their minds and back away,” she added.

According to Polce, it’s getting much harder for dealmakers to factor risk into the pricing of new sale-leaseback transactions. “We’re all trying to figure out what happens when the music stops and we’re all stuck with under-market leases,” he said.

Polce said smaller spreads of 25 to 50 basis points likely will be baked into deals for clients with good credit, with higher spreads for those at the lower end of the credit spectrum. He also cautioned sale-leaseback dealmakers to factor the quality of the property into their pricing.

“Half of the total return in 10-year deals is from the residual value of the property, so there’s a lot of binary risk. It’s important to price the real estate quality (into the deal),” he said.

“Everybody talks about pricing relative to where yields are on a nominal basis, but platforms that have a fixed scale of equity can deploy capital creatively and have a cushion to absorb nominal rate movements,” he said.

Polce said widening spreads on CMBS transactions, which have blown out by as much as 100 points due to concerns over the risk associated with these high-leverage deals, which force CMBS lenders to make more competitive offers.

“At some point, CMBS lenders are going to have to compete on spreads,” he said.

Sale-leaseback activity involving lower- and middle-market companies in secondary markets is strong, the panel said, driven by the surge of private equity sponsorships and an increasing sentiment to hedge against market uncertainties.

The unprecedented velocity in sale-leaseback transactions also is drawing deals involving properties that have ground leases in which the land under the asset has a different owner. Ground leases can have exceptionally long terms, running from 50 to as many as 99 years.

The panel agreed that a record volume of M&A transactions will continue to speed the pace of sale-leaseback deals. The global M&A market topped $5 trillion in 2021 as dry powder fueled dealmaking.